Thanksgiving in my heart...

I love Thanksgiving - a day devoted to family and gratitude. No stress, no gifts, just a day of togetherness. 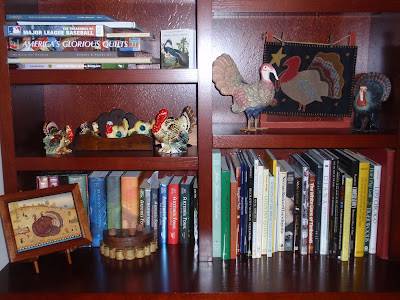 Another reason that I love Thanksgiving is the turkeys. Don't ask me why, but I love turkeys. Their plumage just sings ~autumn~. Without realizing it, I have a little collection of turkeys. I thought that I would share a few... 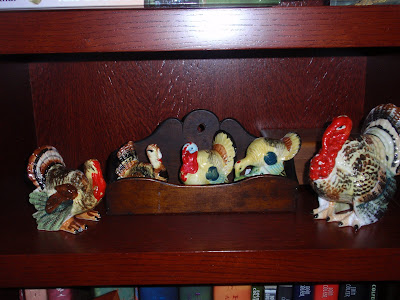 I picked up these vintage salt and pepper shakers at an estate sale and a local antique shop. 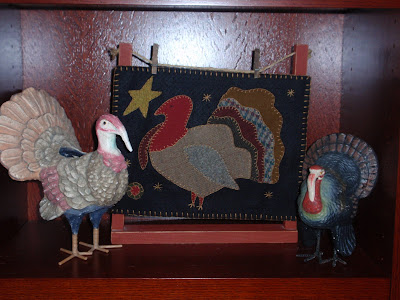 I love these reproduction candy containers with their wire feet. 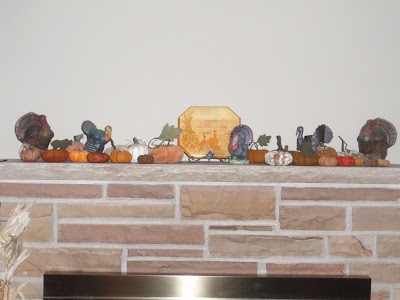 I love to mix them with pumpkins, too. 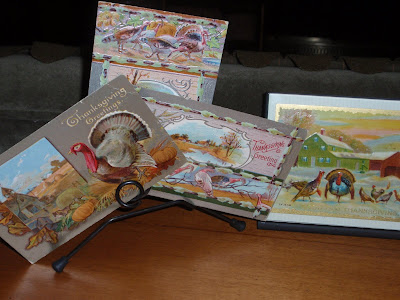 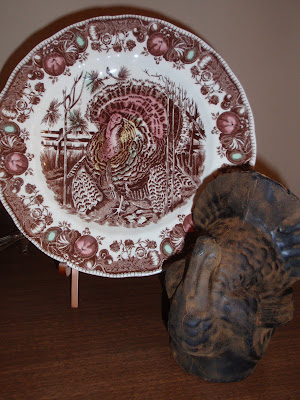 I have four mixed place settings of Johnson Brothers' "His Majesty" and "Autumn Monarch". I've decided that they are two pretty for just one day, so we are using them daily for the month of November. 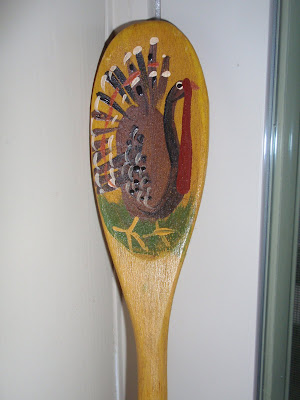 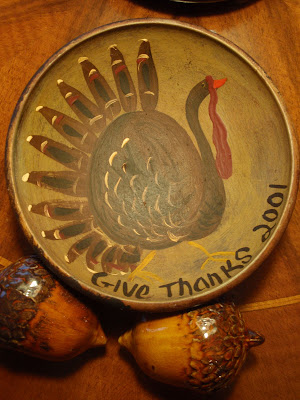 Folk artist, Chris Robinson, painted the spoon and the bowl.
Oh my, I have even more turkeys than I realized :-)
"These things I remember as I pour out my soul: how I used to go with the multitude, leading the procession to the house of God, with shouts of joy and thanksgiving among the festive throng." -Psalm 42:4
Wishing you shouts of joy and thanksgiving in your heart.
Blessings, Patti
Posted by Patti at 8:59 PM 6 comments:

Frost is on the punkin 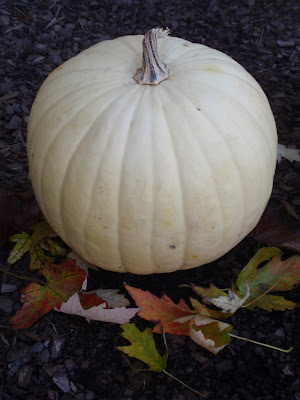 I grew up hearing the phrase, "the frost is on the pumpkin". So naturally, I use the phrase a lot myself. Once when my oldest was in preschool, I repeated the phrase to him. He insisted he could not go to preschool until he saw the frost on a pumpkin. We hadn't bought our halloween pumpkin yet, so off we went in search... Luckily, we found a pumpkin on a porch pretty quickly. I asked my little sweetie if he *saw* the frost and he insisted that he did ;-)

Fast forward to last autumn. I was enjoying Lana's lovely blog - Simple Joys where she had posted a poem titled "When the Frost is on the Punkin" by James Whitcomb Riley. So this is where the phrase came from! I was so thrilled to read it and just loved its folky vernacular.

I was even more thrilled to find Lana's lovely frosty pumpkin creations. It represents warm and happy memories for me... 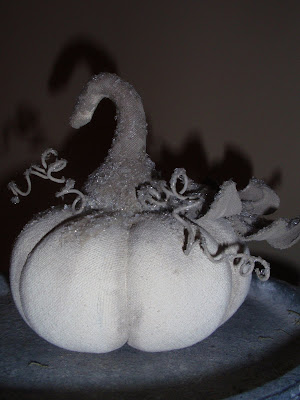 Recently I was at an estate sale and discovered this wonderful book: 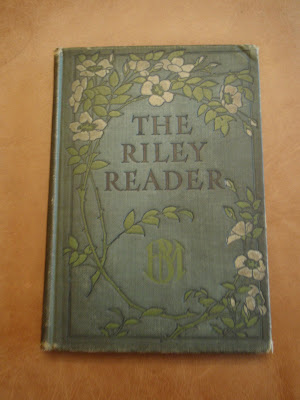 This edition has a copyright of 1915 (originally published in 1883) and is inscribed: "To my dear Anna Mae, so she won't forget, Claire". The binding is loose and the pages quite yellowed, but what a treasure it is to me! James Whitcomb Riley was born in Greenfield, Indiana in 1849. His poetry was considered "childrens verses" and thus this "reader" for children. The Riley Reader even contains "A Suggestive Program for the Observance of Riley Day". "Because Riley Day is already on the Hoosier calender of public observance, some suggestions that may help to give variety are made in the following pages." Suggestions include songs, recitations and quotations... What a treasure! 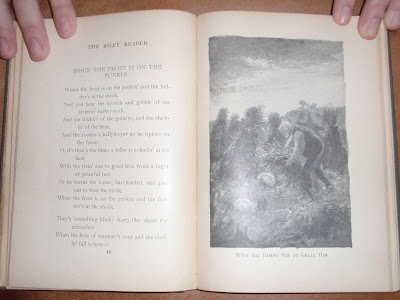 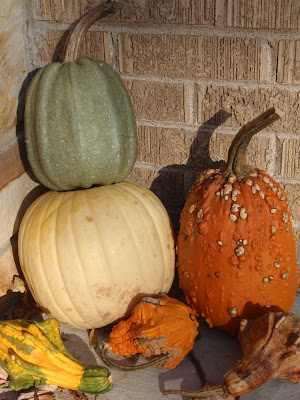 Wishing you frost on the punkin, angels wantin' boardin' and all that comes with this lovely season
Blessings, Patti
Posted by Patti at 11:04 PM 6 comments: 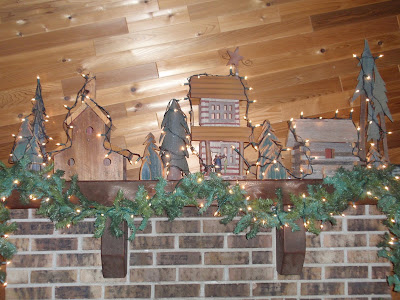 Well, maybe not quite yet... But our "Seasonal Sensations" Show has definitely helped me to move on past Halloween :) 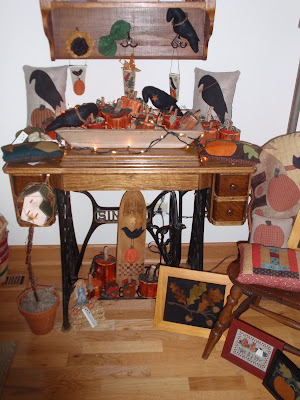 We had such a lovely time with our home folk art show and bake sale held in the warm and inviting home of my sister-in-law Joy, of Joyfully Yours. It was such a blessing to have my mother-in-law, sister-in-law, and niece (Joy's daughter) assist us with the show - a double blessing - holding the show and spending time with loved ones. 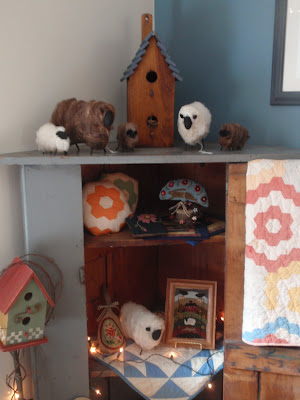 It was such a feast for all the senses - the scent of simmering spiced apple cider, soft strains of relaxing music, samplings of our bake sale sweets...
Joy's home was inspiring. Her unique garlands over each window were so pretty... 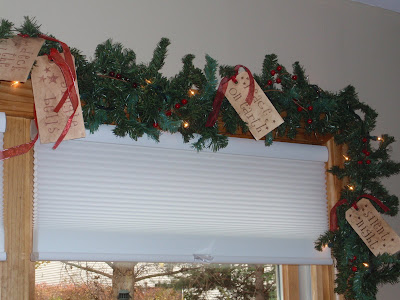 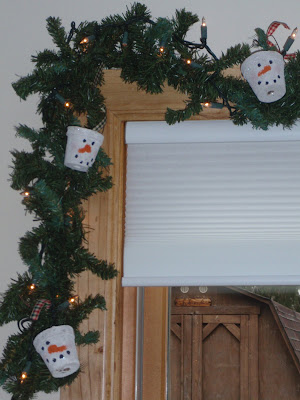 It appeared that everyone enjoyed themselves as they lingered chatting with friends. 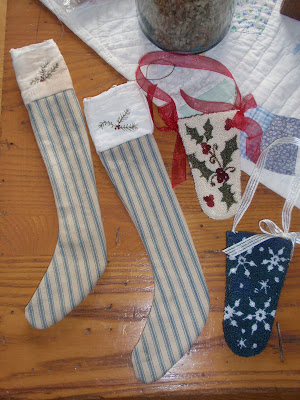 I hope that you can join us next year. 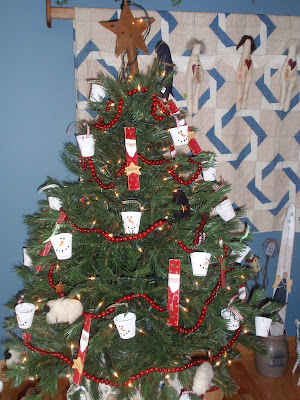 "For where two or three are gathered together in my name, there am I in the midst of them." -Matthew 18:20
Here is My mom's recipe (Thanks Mom!) for Sugar Cookies (that many of you asked for). They were a big hit at the bake sale...
1 c oil
1 c butter
1 c sugar
1 c powdered sugar
2 eggs
4 c flour
1 t baking soda
1 t cream of tartar
1 t salt
1 t vanilla
Cream oil, butter, sugars and vanilla.
Add eggs.
Add dry ingredients.
Drop spoonful of dough onto ungreased cookie sheet. Press flat with bottom of juice glass dipped in sugar.
Bake 375 degrees for 8 - 10 minutes.
Makes 8 dozen.
Thank you to each and everyone of you that made our afternoon a success - from our helpers to our customers! We truly appreciate each of you. 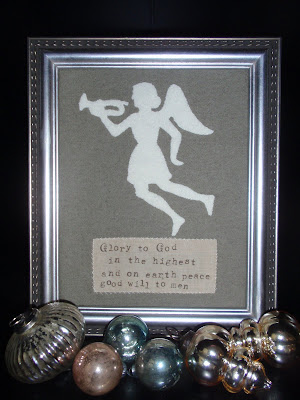 If you will be near Bartlett, Illinois this Saturday afternoon, please join us for a cup of hot apple cider and a homemade sweet. Please email me at pgagliardi9@hotmail.com for the address and directions to the lovely home of Joy, Joyfully Yours. 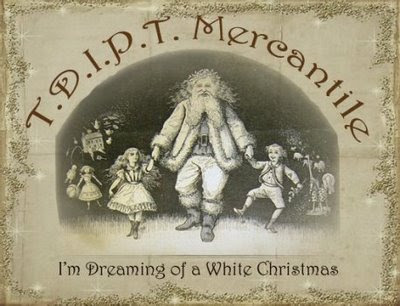 It's hard to believe that November is here already! Before you know it, Thanksgiving will be here and then the Christmas season will begin.

TDIPT Mercantile is kicking off the celebration with the second annual White Christmas Open House for the entire month of November! Be sure to visit the artists both now and on November 15th to see all the lovely White Christmas offerings.

To show appreciation for our loyal customers and visitors, we are offering a number of lovely gifts this month including some lovely handmade door prizes by talented TDIPT artists and a $50 TDIPT gift certificate.

It is simple to be a part of the drawings. Simply sign up for the TDIPT Newsletter. (It is a two-step process, so be sure to confirm your newsletter sign-up.)

You will also receive an extra entry in the drawing with every purchase made.

The drawing will take place on November 23rd, so be sure not to delay!